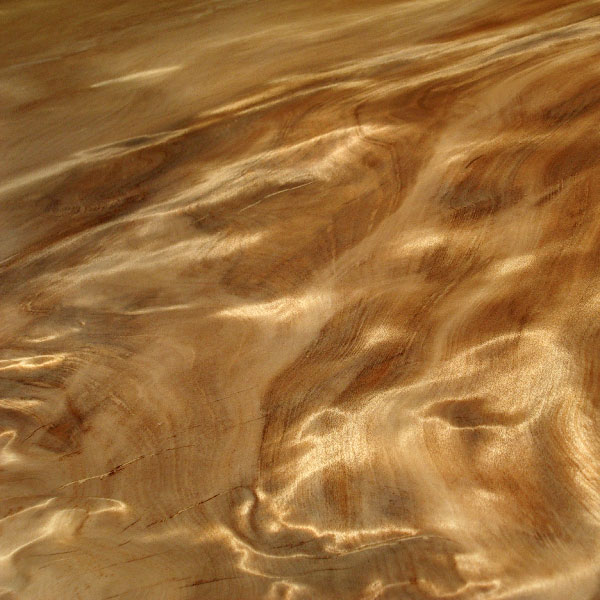 Common Name(s)
Ancient Kauri, Kauri
Scientific Name
Agathis spp. (A. australis, A. alba, and A. vitiensis)
Tree Distribution
Primarily New Zealand, Australia, and Oceania
Tree Size
150-200 ft. tall, 5-10 ft. trunk diameter
Janka Hardness
730 lbf
Appearance
Pale yellowish white to golden brown heartwood. Sapwood typically same color as heartwood. Due to the tree’s large size, Kauri is nearly always clear and knot-less, with minimal wastage. Some pieces of Kauri may exhibit a certain subtle shimmering effect that is commonly referred to as “whitebait,” so named for the iridescent appearance of schools of whitebait fish seen in the waters of New Zealand.
Grain / Texture
Grain is usually straight, with a fine, even texture and a moderate natural luster.
Pricing / Availability
The harvesting of living Kauri trees in New Zealand is strictly controlled, and lumber is seldom seen outside of its natural range, with the exception of “Ancient Kauri”—this wood is from 40,000-50,000 year old trees that fell during the last Ice Age and have been completely preserved in New Zealand swamps and bogs. Excavation of this wood has stopped because there is no more to be found. This wood is arguably the most expensive wood you can buy.